We have recently had the pleasure of participating in a compelling Ask Me Anything (AMA) session. We think the AMA was a successful one with lots of interesting questions and answers to match.

The AMA took a familiar format to the previous AMA performed by the AIOZ Network team. Questions were taken from Twitter in written form and answered by Erman Tjiputra, CEO and founder of AIOZ, via Telegram video. We believe this is imperative to show the dedication behind the project from the individuals within the team.

If you were not able to participate in this specific AMA, beware of upcoming events and follow us on Medium, Twitter and Telegram.

Before delving into the AMA, Erman wanted to bring the community a summary of what has been accomplished in the last few months and what is in store of the AIOZ Network community. You can check out these updates in our Telegram group here. We have compiled them below.

At the beginning of the AMA, Erman announced the completion of the Uniswap v3 and Pancakeswap v2 migration, along with the associated liquidity pools. $AIOZ has also been integrated with the trust wallet and Metamask for this upgrade. The private investor vesting schedule has also been updated.

On April 26, the $AIOZ bridge was also released allowing users to swap between the ETH and BSC blockchains.The were also several CEX listings, including Kucoin.

AIOZ.Tube, the native dApp for the AIOZ network has been updated with bug fixes which prohibit malicious accounts to be generated in the platform and A.I. content moderation and mitigation of farming has also been implemented.

The AIOZ Edge is currently at the 0.75 version, having received 20 upgrades since their release on April 2. Websocket, content geolocation and video upload and distribution has been improved. AI Smart Caching is currently being implemented.

WebRTC (Real Time Communication) has also been successfully implemented this week. Laying the foundation for the future of p2p streaming inside AIOZ Network.

An update of the AIOZ Network roadmap has been released and can be seen in the image below:

The AMA: Questions and Answers

The AMA took a familiar format with questions being asked in the official AIOZ Network Twitter and being answered by Erman via Telegram video. We have compiled a text version of the best questions and answers which can be read below

The first question came from @notPsyLow and it touched on one of the hottest topics of the crypto industry at the moment, Non-Fungible Tokens (NFTs):

Question: You mentioned NFTs in a couple of tweets a while back. What is the plan for aioz to enter that space and to what extent will the integration be? Just NFTs on their own? Or maybe even a marketplace? Please elaborate.

Answer: AIOZ will be launching the NFT marketplace in Q2 2022 as shown in the updated road map. The AIOZ NFT Marketplace will create a utility use case for $AIOZ where AIOZ becomes the medium of value to be exchanged amongst Content creators: Collectors ( Buyers and Sellers). Regarding the NFT platform: The AIOZ NFT Market place will be natural fit for AIOZ Tube v2 content creators to engage with audience.

Then, user @moonlightt053 inquired about AIOZ TV, the native live-streaming app, and its complexity:

Question: You pointed out that AIOZTv is a live streaming app that turns your real-life events into a business, but is it really that simple? Can I make streaming of any event, and everyone can have access to it?or only those users who are related to me like a conventional social network?

Answer: One of the upcoming features of AIOZ Network is live streaming. In order for live streaming to function. There are 2 conditions to be fulfilled:

We enable GPU transcoding functionalities into the AIOZ NEtwork edge nodes and require critical mass adoption of nodes. The outcome is Real-time delivery and reduction of costs-

With Livestreaming functionalities enabled, this will create a whole new ecosystem of live streaming dApps powered by AIOZ Network.

The third question comes from @1010Berat1111 and it touches on the advantages of the AIOZ Network decentralized content delivery network (dCDN).

Answer: Traditional Content Delivery Networks are architecture servers with centralized Single Point of failure. With decentralized CDNS, computational power are distributed across peer-to-peer nodes in transcoding, delivery, and storage. Cost Savings are instant. because of the nature of P2P systems, costs are distributed.

The AIOZ Network, powered by the community of Nodes in the millions, creating a truly p2p mesh network of interconnected nodes for you to stream to your neighbor and be rewarded with $AIOZ, dApps will be able to easily integrate with our AIOZ network nodes as easy as plug and play with efficient cost & high streaming quality.

AIOZ dCDN provides instant cost savings than traditional CDN because the storage, transcoding and delivery costs are distributed among the p2p nodes therefore transferring these costs savings to the platforms dApps.

A more technical question comes from @Crypto_Isaac regarding the WebRTC flow which is explained by Erman.

Question: How will AIOZ ensure WebRTC flow is enabled on End Nodes and how will WebRTC improve user experiences?

Answer: webRTC is enabled in edge node version 0.74 and supports webRTC streaming by default. Users will experience enhanced video quality as shown in our deployment of webRTC on AIOZ.Tube.

Lastly, a question by @nguynvn37958796 asks what sets the AIOZ Network apart from its industry competitors.

Question: Can you list the most important features of AIOZ that set it apart from its competitors in the same field? What advantages do you believe in the most in your project?

Answer: The most important feature is AIOZ dCDN with P2P streaming with Blockchain.

We create a p2p streaming engine inside our AIOZ Network Edge Node Applications that are incentivized with AIOZ Tokens to power the dApps ecosystem The advantage is simple: our unique talent is our best asset to solve all technical challenges in the field of p2p streaming with blockchain 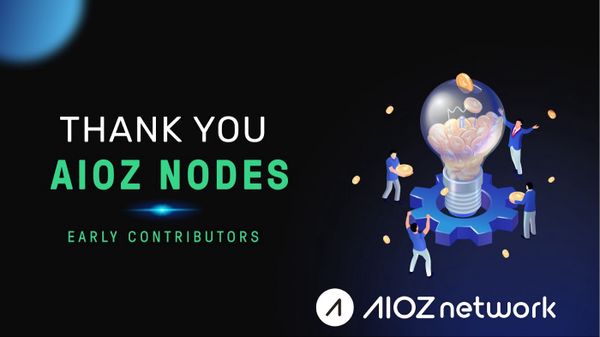